The Semester Starts with Racism and Misogyny – Mmmm Good

I have a very strange internet friend whom I’ve ‘known’ for a long time from years ago – back when I was a serious researcher doing serious research and not frittering my life and spirit away in China. We collaborated on a short project online, but we have never met in person. At this point, this acquaintance’s role has morphed into one of sending me occasional stories of ‘how fucked up China is’. News of the weird. Of human rightsy weirdness. Bizarre deaths resulting from Chinese neglect. That kind of thing.

The thing is, I KNOW ALREADY. I live here. I experience bad and weird things here all the time. I don’t bother to comb through alt-media sites or even mainstream Western media for Chinese fuckery because the day-to-day stuff that I see in situ is bad enough.

When you come from a country where there are *sometimes* consequences for abusing power – or at least the pretense of consequences – or at least mechanisms and bodies set up to deal with power abuses – it is hard to imagine it working otherwise in other places. So Westerners can’t understand that if they go to China, if anything untoward ever happens to them, there will be nothing whatsoever that can be done. Unless you have managed to get very well connected with powerful people, that is. And the majority of Western people – or any foreign worker, for that matter – are extremely vulnerable to abuse because they aren’t connected. Newbie Western workers will often try to fight what has happened to them with logic or human-rightsy arguments that usually start with: “This would never happen in MY country.” And they might be right. Maybe. It might happen, and you might be lucky to have a way to fight it. There is definitely more of a chance of fighting it in the West. But in China, you learn very quickly that anyone can do anything to you at any time. And you are not allowed to say anything about it. Even contract agreements between you and the Chinese only apply to you. If you don’t live up to the contract they can do what they want to you. But as a Chinese, they can break the contract every single day. You can complain if you want. And they will ignore you. And they might fire you because you don’t take abuse well. Their firing techniques are almost always passive-aggressive, subtle manipulation. It is actually the exact mentality behind Western men complaining about Western women. The whole “I love Asian women” phenomenon. Western women believe they have rights as humans. Most men don’t like that, and some will go East to find the perfect docile slave.

Many of the younger Westerners who come here are ‘liberal’, so they don’t usually complain, and may often make excuses for the Chinese (aka ‘apologism’), because they hold the Western mentality that the Chinese are oppressed – which isn’t actually true anymore in the West, nevermind the East. It’s the older white (and usually incompetent) male who comes here for a pussy and booze free-for-all who gets very angry and loud when he isn’t treated like a member of the dominant race. And both groups are delusional, by the way.

It is hard for many Western people to wrap their minds around that non-Western reality.

I once read a disturbing, but amusing (because I could understand it on a personal level) little essay written by a long-time foreign resident in China about the stages foreigners go through when first living in China. It was written by a man, and thus didn’t take into account that China is much easier for men to deal with for a number of reasons. But I still recognized some of the elements in it. The whole essay reminded me of the grieving process one goes through when dealing with a death – starting with anger, moving through depression, and eventually resolving with acceptance of reality. It was troubling to realize that living in China was so similar to dealing with a serious loss such as a major death, but it is actually very much like that if you stay long enough. Living in China really does mean giving up your personhood or identity. It is a death of sorts. Whether you can be reborn or whether you remain living as the undead, is another thing entirely and is dependent upon either having your mind and spirit broken completely and thus becoming open to brainwashing or being able to escape most of the mundane Chinese abuse through obtaining an elitist kind of job with super-high pay.

I’ve thought about this a lot. Many sociologists and cross-cultural researchers paint this simplistic black-and-white picture of individualistic cultures and group-based cultures. And of course, the former are painted as evil and latter are somehow superior. But I think this conclusion, and the whole type-of-society dichotomy are not quite right. I actually find the Chinese to be much more individualistic and self-centred and heartless in some ways that I have not been able to explain (until recently) using the group-think or collectivist society model. Likewise, that model hasn’t explained the countless examples of supposedly average, individualistic, selfish Americans and other Westerners relentlessly donating their time and money to humanitarian efforts or to helping random people on the street. You may not see this if your knowledge of China has come solely from movies and the news, but given how much time I’ve spent in non-Western countries, I’ll tell you how jarred I am by how much positive and pro-social interaction there is between strangers in the West. Every time I return, I get freaked out. Strangers helping strangers. Hell, strangers talking to strangers. You never, ever, never, ever see this in China. Ever. Ever. People don’t even say ‘thank you’ here. But that is a post for another time. I have developed my own theory as to this individualism vs group-based society phenomenon.

I haven’t written in a while simply because my first two weeks back at work have been a racist, misogynist fuck-fest. There has been plenty of Chinese bullshit and some Western male bullshit, too.

I spent the week correcting the grammar of misogynist sentences produced by my male students, which was fucking awesome and not a mindfuck at all!

And the second week saw a quiet, moneyless payday – and an announcement from the university that they had no intention of paying us this month for last month. They announced to us that the pay schedule will change (again). Now, they are going to start paying us TWO WHOLE MONTHS after the start of each pay period. We get paid monthly, the pay date has been pushed further and further away from the pay period each year that I have been with this university. And now, work that I do on March 1st won’t be paid until April 30th. What??? I am not allowed to protest this. They have implemented worse abuses in past years – like breaking my contract and quadrupling my work load for no extra pay. The foreign staff has protested individually, but as Chinese, they give excuses and end up doing what they want to us. This new payment policy actually feels very much like one of the passive-aggressive Chinese punishments. They may be looking to clear out foreign staff by implementing abusive policy, so they can bring in new, naive people whom they can pay less. 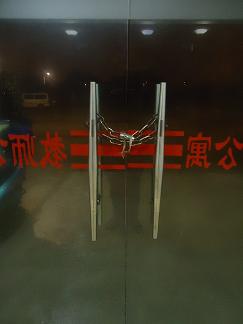 Every night at 11:00 pm, staff were chained into their building. Apparently, it was ‘too dangerous’.

This happens all the time. I’m used to it. There is nothing ‘fair’ about the Chinese. It may surprise you to know that this is the best place I’ve ever worked in all the years I’ve been in China. At least these employers don’t chain the staff into our residential building every night like my last employer did. Nobody could get in or out except the key master. The Chinese didn’t understand why the Western staff had a problem with that. A simple, humane solution to the ‘grave danger’ looming over our building would be to install a key card or coded key pad entry system. But that would cost the Chinese money. The Chinese don’t like to spend money.

But the worst of these first two weeks back was actually dealing with a horrible, British, male acquaintance/co-worker and his disgusting misogyny last Saturday. I’m still reeling from it. Unfortunately, I need to stay ‘friendly’ with this asshole, as one really needs allies when you’re working for the Chinese. The Chinese deliberately try to keep Western people in the dark and misinformed and isolated on several levels so that we remain powerless and disorganized. Because foreign workers are ALWAYS abused, it is really key to have as many allies as possible – even if they are assholes. Information needs to be shared since it is so hard to come by, and sometimes protests must be done as a group or at least in numbers. But the cost of being friendly with jerks can be really hard, and the deeper I get into feminism, the harder it is to deal with men who don’t see me as a full human.

I’m going to write about this asshole. It’s one of those things that ended up being successful in my mind even though it didn’t and doesn’t necessarily feel like it. I’m glad I did what I did, but my body and mind are paying for it. More soon…

Feminism, atheism and other stuff
View all posts by storyending »